Thank you to all who supported us in any way, for our Em.bod.y show. You have our affection and gratitude. It was a tremendous success, and we are still reaping the benefits from it. I'll post more about that soon.

Below is a short video of my latest piece, The Battle.


The Battle is based on a Japanese folk tale, "Momotaro" or "Peach Boy". Momotaro is destined to be a blessing, having been born from a peach found by an elderly, childless couple. Indeed, he grows up and, accompanied by an unlikely band of warriors, conquers the oni (demons) who have plagued his village for years.  In my adaptation, the hero is more aptly called "Momotoad" or "Peach Toad".
Posted by Margaret Ouchida at 7:58 PM No comments:

Please support me and 7 fellow emerging artists to have an art show this summer :^)

Some fellow artists and I are working to have an art show this summer. It is difficult because it is expensive to rent a proper space in a prime location, so we're trying to raise the money on Indiegogo.


About us: we all know each other from art school - most of us having studied together. We've had the privilege of learning and growing together, and seeing each other develop our voices and our styles. These are not only my friends, but also some of my favorite living artists.

Half of us will be leaving in the Fall, to pursue more art education elsewhere: up north and on the East coast. So this show has a lot of emotional value for us too: it will be our last time to have a show together before we part ways.

It is my strong opinion that the art work for our show is phenomenal. I think that many if not most would agree. We would like to have the opportunity to be recognized as emerging artists to keep an eye on.

If you believe in us, please support us in any amount. Thank you so much :^).
Posted by Margaret Ouchida at 1:08 AM No comments:

Thank you to all who participated in my survey!

Your feedback has been very helpful in giving me a feel for both consumer and recommender receptivity to the book. Thank you for taking the time to give me your honest opinion :^))))))

If you haven't taken my survey, it is still available by clicking on the following link:


I would greatly appreciate it if you would participate. The survey is anonymous.

Regarding some of the feedback I received, I'd like to address some of the questions/comments/suggestions:

One person asked how my illustrations were illuminated. They are 3-D pieces that are constructed in a box. All lights are electrically wired, so each box needs to be plugged in in order for the lights to work. I have used LEDs, grain of wheat lights (used in train sets), and fiber optics.

The same participant wanted to see asian characters in the book. I wasn’t necessarily thinking “ethnicity” while writing the book, but I was thinking “toad world”. Nevertheless, I see that in the clothing I designed for “The Wedding”, the groom’s clothes have a definite European influence. I will rethink it to see what I can come up with that is simply distinctive of what a toad would wear in a "toad world".

I’d like to mention that in another piece I am working on, the toad characters do happen to be Japanese. The piece is based on Momotaro, a Japanese folktale. http://en.wikipedia.org/wiki/Momotarō However, in my depiction, the main character is a toad instead of a boy. Along with the dog, monkey, and pheasant warriors, I also added a female toad warrior dressed in an "armor-ized" kimono. She is a fierce archer whom the oni (Japanese demons) are loathe to contend with!

Another comment in the survey asked whether the characters should be toads or frogs. I chose toads because I have pet toads, and they were the inspiration for my book. At the end of the book, I plan to have a page that gives facts about toads. It’s a great educational opportunity to explain some of the differences between frogs and toads.

Posted by Margaret Ouchida at 11:53 PM No comments:

Please read the synopsis below and take a look at the two toad illustrations in my prior two posts: 1. The Wedding and 2. title page illustration for "The Treasure Hunt". After doing so, please take the quick 10 question survey at:

The purpose of this survey is to give me feedback on the book project I am working on so that I can proceed in a directly informed manner.

This picture book is geared for children ages 4 - 8.

Synopsis
After finding a treasure map, three toads embark on a treasure hunt. They go up and down, in and around, over and under until they find the spot marked “X”. Among the treasures they unearth is a photo album. As they go through it, they discover that it is their family album. Each of the toads is excited when they see their tadpole photo. That is, until they come to the page where Squirt’s tadpole picture ought to be - but it isn’t there! Instead, there is a photo of Papa Toad and a red car. Budgey recognizes it as Papa Toad’s favorite car but can’t remember what happened to it. Squirt is hurt as to why his tadpole photo has been replaced by a photo of Papa Toad and his favorite car. As the toads go back home, they spot the red car! They follow it and as they do, they soon realize it is going to their house. It is then that they discover the truth of the missing photo. As the truth is revealed, Squirt gains more insight as to how very much indeed he is loved.

Thank you very much for your feedback! Feel free to direct others to take this survey as well - especially kids!

Posted by Margaret Ouchida at 10:58 AM No comments: 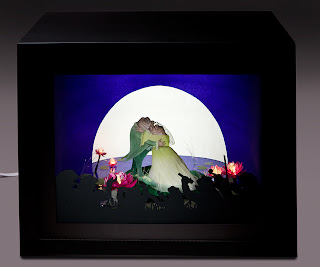 This is another illustration for "The Treasure Hunt". I worked with water glass, water color, paper, LEDs, and fiber optics in this piece. The skirt of the wedding dress is a synthetic calla lily turned upside down.
My best memory of working on this piece is when my mom helped me by drilling the holes in the glass. It was a hot summer evening and we were in her garage using one of her stained glass machines. She drilled a half dozen holes for me, keeping the glass more steady over the drill bit than I was able to. I remember looking over at her and seeing sweat drip down her face from her white hairline. The resounding thought in my head was, "My mama loves me!"
Posted by Margaret Ouchida at 9:53 AM No comments:

Illustration from "The Treasure Hunt" 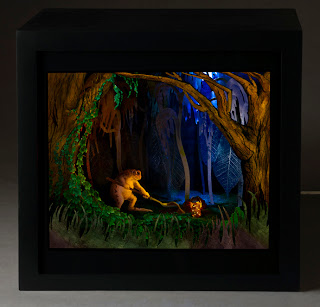 This is the title page illustration of a children's book I am working on. This illustration is 3-D, done in mixed media: water color, artist's markers, cut paper, flocking, and lights. The fire fly lantern flickers! My pet toad Tesoro kindly posed for me, though not quite in that position.
Posted by Margaret Ouchida at 10:45 PM No comments: 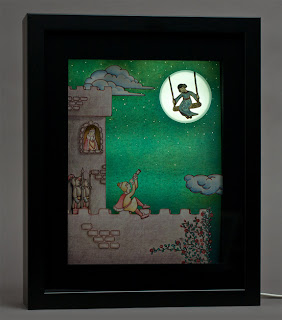 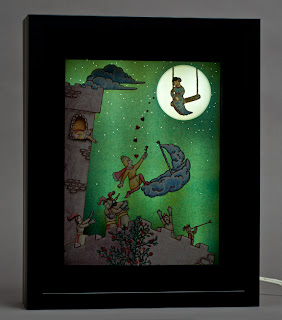 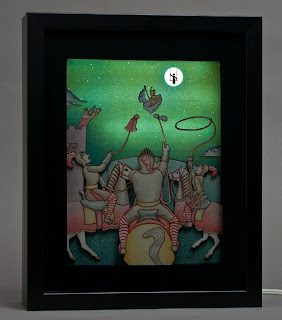 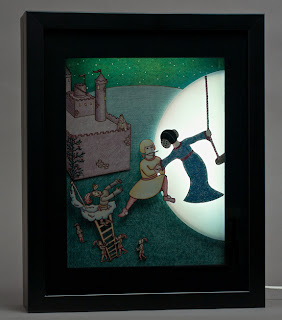 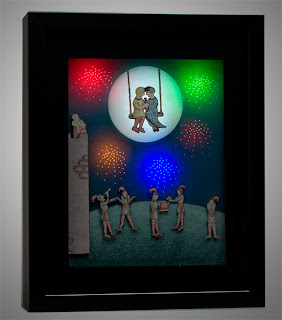 Smitten was great fun for me to create. It is a visual story based on "Humpty Dumpty" with a romantic, comic twist. I used colored pencil, ink, watercolor, LED lights, acrylic, and layering to create the five pieces. The fireworks in the final image burst on and off in celebration of the happy ending!
Posted by Margaret Ouchida at 10:22 PM No comments:

Margaret Ouchida
Orange County, CA, United States
Artist, writer, and Sunday School teacher. I've loved picture books, stories, and God from a young age. My art is an expression of the delight I have in these.